Sky Fallers is a 7-piece pop, rock and funk band which performs hits from the 60s to the present day. It is the brainchild of two staff members from our Supported Living Service: David Turner (who works at Westerton Road) and Alex Gray (who works at Delph View).

David and Alex were both with another band known as the Wrong Songs who performed regularly at The Bridge and Hamara. These gigs proved very popular and customers were soon saying they’d like to get involved. Therefore, in October 2014, the band co-ordinators held auditions for potential members. Customers across the service went along to sing or play a musical instrument and 4 people were selected to be in the core band. They rehearse every Tuesday at Middleton Leisure Centre. The band also has guest members – musicians, singers, dancers and drummers – who join them for particular songs.

Although it’s only been a year since the band formed, they have achieved a lot. Gigs so far include the Cultural Awareness Day, south Leeds summer fest, Leep 1 club night, PHAB club, YAMSEN, Beeston Action for Families and for rugby world cup players – and many of these have asked for a repeat performance.

The band has been so successful that they even picked up the Creative Award in the 2015 Customer Awards during learning disability week.

Now the band is planning its biggest show to date. They are putting on a benefit concert to raise money for rebuilding after the Nepal earthquake. This tragedy may not be in the news any more, but the musicians and singers know that money is still desperately needed. So, they have persuaded two other learning disability bands to join them for the event: The Outsiders and Ultimate Thunder. It promises to be a high energy evening that is not to be missed.

The concert is on Thursday, 22nd October from 7 until 11pm at Wharf Chambers, Wharf Street, Leeds LS2 7EQ. Tickets cost just £5 for people who are in work, £4 for people who are not working and carers can go for free. You need to pre-book these with David on 0796 107 3063. It’s not too late to buy tickets, but you need to hurry as they’re selling fast.

Top picture – band members (from left to right) are: 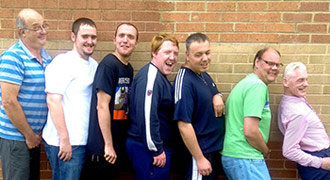 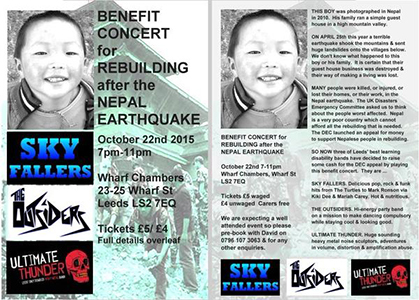